Get to see the Adirondack wildlife up close while on your vacation in the Adirondacks. Lake Abanakee is a popular destination amongst birdwatchers. However the area has even more wildlife spotting opportunities. With moose, black bears and deer wandering through the woods surrounding the lake, it’s one of the best places in the New York state to spot wildlife. One of the best ways to do so is by kayaking or canoeing on the water. This gives you the best chances of seeing sone of these impressive animals while drinking water from the lake.

You won’t get to see the Adirondack wildlife up closer than this. This video is amazing. While Kayaking in the Adirondack Park Susan Kiesel and friend Bob Zimmerman, discovered a rare Adirondack Moose. The experience lasted about an hour and they said it was most exhilarating. What an unexpected treat. Moose numbers are on the increase.

At Pike Point we have 4 kayaks and a canoe available for guests to use so you may be lucky to experience something like this when on vacation.

Then there are the Loons…

The loon, is the size of a large duck or small goose. Like ducks and geese the loon’s toes are connected by webbing. The bird may be confused with cormorants, which are not too distant relatives of divers and like them are heavy set birds whose bellies – unlike those of ducks and geese – are submerged when swimming. The bird points its head slightly upwards during swimming, but less so than cormorants. In flight the head droops more than in similar aquatic birds. But it’s the sound of the Loons that will stay with you forever. Listen to this video to understand what we mean.

If you are lucky you may get to see some real Adirondack wildlife up close. The American black bear is a medium-sized bear native to North America. It is the continent’s smallest and most widely distributed bear species. Black bears are omnivores, with their diets varying greatly depending on season and location. More on Black Bears here.

Adirondack bald eagles are a rare sight, and are found exclusively in North America. While they were once an endangered species, they were removed from the federal list of threatened and endangered species in 2007 but are still on New York State’s list of threatened species. The New York State Bald Eagle Restoration Project brought and released nearly 200 nesting bald eagles in New York to begin repopulating the Adirondack Park. 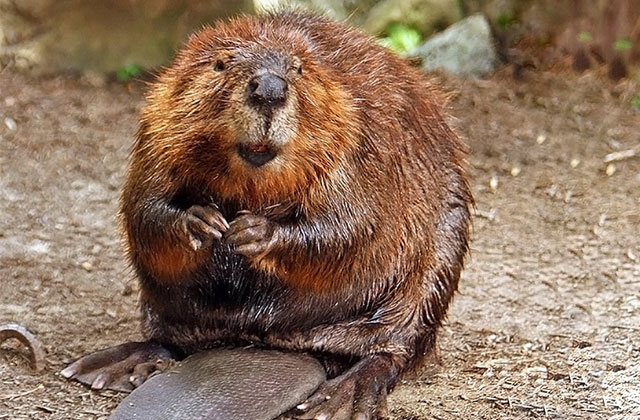 Beavers are the official mammal of New York State, and occur almost anywhere there is moving water and trees on the shoreline. They are well known for the thunderous warning slaps or splashes of their tails that alert other family members to the presence of intruders. Over a period of years, a single family of beavers may build multiple dams and lodges, but construction does not end with them. 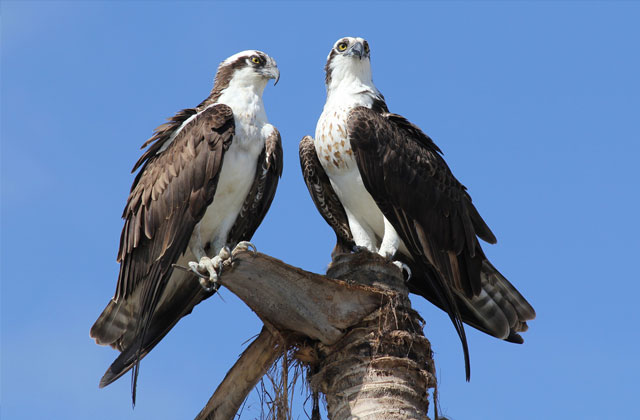 Ospreys feed primarily on live fish, which they catch by using their long, hooked talons. An osprey sometimes plunges deep enough to momentarily submerge its entire body.  It readily uses nesting platforms close to human habitation and many appear quite unperturbed by human presence. They often use the same nest year after year and add more sticks each year becoming quite large-up to 10 feet tall. 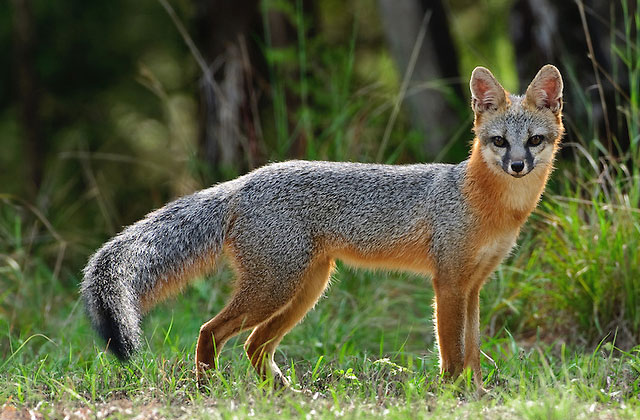 Grey foxes are rarely found to exceed 12 pounds and more often weigh significantly less. Covered with grizzled grey fur, with reddish fur running along the sides of the neck and up towards the ears, a pale belly and a black-tipped tail, the grey fox is a strikingly handsome animal. It is also equipped with semi-retractable claws, which enable it to scamper up trees to avoid predators and curious humans. An inhabitant of woodlands, it is quite at home in our northern forests. 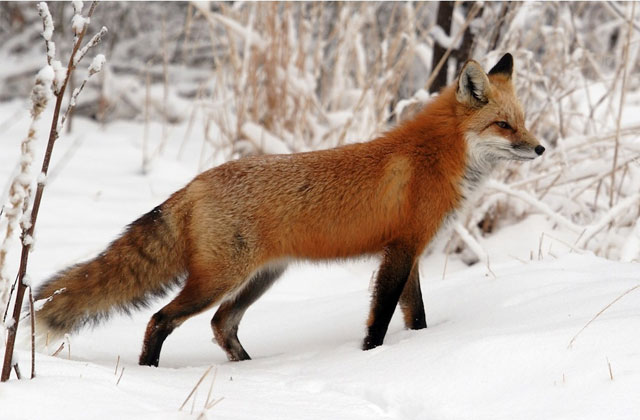 Red foxes are animals of woodland edges and open fields. Although less stocky than their grey counterparts, red foxes are known to reach weights upwards of 15 pounds. And while most red foxes are indeed red (well, actually more orange than red), as a species they exhibit great variation in color, running the gamut from yellow-blonde to black. There’s one thing they always have in common, though, and that’s a white tip on the tail. If you see a white tip, it’s a red fox, regardless of what color the rest of the animal is.

White-tailed deer resides in all terrestrial communities throughout the Adirondack Park, but are generally more numerous in the lowlands of the Park than in the higher elevations of the central Adirondacks. For many visitors, the view of a white-tailed in the Adirondacks is the highlight of the their experience in the Park.

Bobcats are solitary animals and are largely regarded as nocturnal, although they may be active at any time of the day or night. Contact with humans is rare and they are not known to attack people. Sightings are regularly reported throughout the state, but occur most frequently in the Adirondack and Catskill Mountains. Excerpt taken from Adirondack.net.

While the turkey is traditionally viewed as one the most successful inhabitants of open, temperate forests, the cold-hardy nature of this bird and its resourceful and adaptable traits permit it to survive throughout the Park, even during winters when intense cold and deep snows are the rule for lengthy periods of time.

Unlike wolves, coyotes don’t establish true “packs” with other adults, and instead travel in “family units”. Coyotes are extremely territorial, and therefore are unlikely to cross into the territory of a different family. While the species is not known for aggressing humans, they do pose a serious risk to domestic pets.Excerpt taken from Adirondack.net.

Make sure that you visit the Adirondack Wildlife Refuge 977 Springfield Road, Wilmington, NY 12997
Open 10 am to 4 pm, Thursday through Monday
Wolf Gathering Talk at 10 am daily